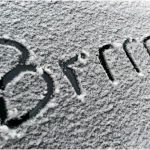 The goal was to check the dependency between environmental temperature and the pressure, measured by the watch in conditions, where environmental pressure is a constant.
The altimeter mode was used for comparison, because Casio’s manual says that the air pressure drops by 12 mbar for each 100 meters if height is below 500m and therefore, Casio’s altimeter is a barometer with a better precision. Barometer has resolution of 1 mbar and altimeter has 5 meters i.e. 0.6 mbar precision.

In the first test I turned on altimeter mode, set 2 minutes measurement interval and put both watches into the freezer for 35 minutes.
I checked readings every 5 minutes.
As I remember (these tests were conducted years ago and I even don’t possess any of these watches right now), PRG-40 has no relative altitude indication, so absolute height was being recorded.
For PRW-1300 their relative altitude was set to zero and so relative height was being recorded during the measurement.

After PRW-1300 had been taken out of the freezer it’s thermometer showed -8.3°C.
Because their altitude readings had not changed in the freezer – they shouldn’t have returned to somewhere 🙂

I think this test shows that PRW-1300 has thermo-compensated pressure sensor and PRG-40 hasn’t.

Nevertheless, I did one more test to be sure that environmental pressure remained stable.
I put one watch in the freezer for 35 minutes and had been comparing its readings to the watch on my hand.

The temperature of both watches dropped approximately to -6.7°C

A year or two after these tests I did the same comparison between PRW-1300 and Suunto Core. 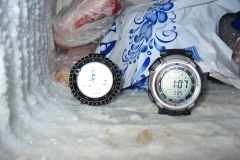 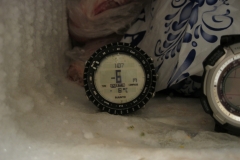 Here is the results:

So, definitely, Core has a thermal compensation. The shift of pressure readings here is much smaller than the shift on PRG-40. But its precision and also the real precision of the Suunto’s pressure sensor is worse than declared resolution of 1 meter.
I think that Suunto’s 1m altimeter is rather some software trick. Maybe now, in 2016, the third generation of Casio pressure sensors can perform a real 1m measurements, but 10 years ago it was a trick 🙂
Now I have only watch with 2nd generation sensor – PRG-240, which still has altimeter resolution of 5m, so I don’t know for sure how good newest Casio sensors is.

What about depthmeter?
I only able to say that it works and shows the depth of my bath as 0.5m that is quite accurate. 🙂
But after the watch gets wet its barometer becomes inaccurate while the water is on the sensor’s surface.