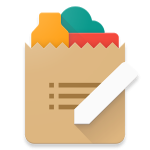 In my family we often used pieces of paper to write down a list for the next grocery store visit.
In most cases those papers were used to pass a list of necessary purchases from my wife to me, but also they could be used by one person to write down all necessities before shopping.
I think this is a common situation and many people use such lists.

Actually, we used small square stickers and stuck them on the fridge.

After some time I began to feel some inconvenience because sometimes I forgot to take these lists to the grocery or I couldn’t understand a handwriting.

So I decided to do a simple web service on my own web server, that will serve as a shopping list. 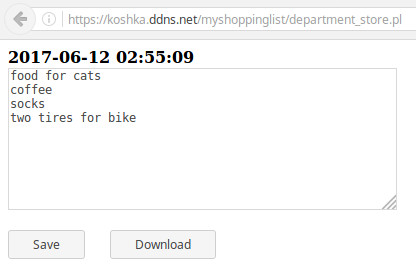 I believe, there are already some similar services. I believe they have nice web interfaces and dedicated android/ios apps. Probably some of them are free at least in the basic configuration. But I am not interested in them 🙂

I wanted my own, secure, private, reliable service with minimal IP traffic requirements.

By the way, have you ever seen a SOAP request carrying, for example, an array of 10 digits? I have seen such 500KB monster in SOAP::Lite/OTRS and that is why I am afraid of any apps with unknown protocols. I pay for each MB in my cell phone plan and want to reduce traffic consumption.

I have created a simple CGI Perl script. I tried to use in this script as less external modules as possible, although it might not be considered as a good idea by some people. Also I used MySQL backend for this project, because it is very convenient to me – to use a database, although for the simplicity I had to use a text file backend.

This script is used for very simple web page, containing only one <textarea> field and two <button>s. This page has no its own html or template file and described inside of the script.

This project implies that you can create a number of shopping lists.
Each shopping-list, of course, must has its own http file name and by this name it will be distinguished by the script.

Now, when you access new_shoplist in a browser – you actually call main_shoppinglist.pl but pass to it ‘new_shoplist.pl’ as a REQUEST_URI, so you should add proper credentials for this new list in the ‘dispatcher’.

Database for this project is simple, consist of one table and store all shopping history :). The rec_target column is used to distinguish different lists.

Any kind of sessions or locks at application level are not supported in this script. It is redundant complexity in my opinion.
I actually use this service for a few weeks and found it convenient. It works well on desktop Forefox/Chrome and even in Android 4.4.2 standard browser. It also worked in a few different Opera browsers for Android and Lineageos’ Jelly browser.