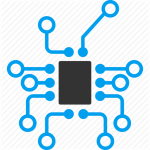 This is a preface to the next few posts about simple LED message boards.

Since I was a child I was interested in electronics. But it was just a feeling, impression. There were no any actual deeds until, probably, my 15th birthday.
Why hadn’t I done anything to get closer to my field of interest before that? I don’t know. I can only speculate now.
I have a predilection to dream than actually to do anything.
I was a child during the last years of the Soviet Union and there was a lack of electronic components on the market.
Later, after the Soviet Union had fallen and I had found myself in the “Independent Republic of Kazakhstan”, the situation with electronic components and tools became much better, but my family almost completely lost its livelihoods for the next ten or more years.
As I remember, I spent a lot of time in the libraries, searching for simple schemes I could start with, but they all were cut out from the books 🙂
Obviously I wasn’t the first “geek” at that libraries. And later, at the college library the situation was the same – all simple tutorials either had been stolen or their schemes had been cut out before that books got into my hands..
Anyway, even if I would find any simple scheme I hadn’t any soldering tools, resistors, transistors, power supply and so on.

Things stared to change approximately when I was fourteen-sixteen. I was at the hospital for a physical.
There I met other patient which name was Jury. As I remember, his father was an electronic engineer or technician so Jury had some practical skills in electronics.
He gifted me a simple PCB with multivibrator which worked in acoustic range. That PCB wasn’t really Printed Circuit Board. That was a small piece of foil glass fiber, divided by a knife into 6 electrically isolated zones. Also it was tinned very well 🙂 Its tin surplus I had been using for a long time 🙂
Those circuit board was my first real experience in electronics, it went through a number of modifications and helped me in learning of transistor’s basic principles.
By the end of school my equipment got slightly better. I’d got soldering-iron and some old appliances which I could use for parts.

The problem was, that my education and progress stayed on the multivibrator’s level for a long time.
Despite the fact that I’d been spending all my free time playing with electronic components that I had, all the schemes I created were kinds of a switch.
I still had no literature, no gauges and so on.
As I remember, at that time, I never got any electronic components with values suitable for audio amplifier. Never got any digital chips.

In the 1998 I enrolled in college (it is called college there but actually it gave you only a trade, not a higher education) for specialty “Communication to moving object”.
It was a radioelectronic specialty.
But those college haв some problems with electricity bills so during the year when I was attending it – there was now electricity…

So actually there were no practical classes at all. The best that we had been doing on practical classes was a sorting old diodes between a few boxes.
But often the “practice” was to clean the territory, to dig some pits, to clean some shit from the basement and so on.
In my memory this place remains a horrible one. I hope that those place have became better now.
Nevertheless, I managed to get there some theoretical knowledge and understanding about transistors, filter circuits etc which would help me later.

Actually, I don’t blame the environment for I had not became a good electronics engineer.
I think that was a tragic concatenation of circumstances 🙂
The strength of my interest and my capabilities was not sufficient to overwhelm the adverse circumstances.

And maybe the final nail in the coffin of my chosen path was the specialty that I selected at the Orenburg State University at 1999.
That was “Radiophysics and electronics”.
I really thought (as many of my fellow students) that it was an engineering specialty, but that was a mistake.
It was rather a mathematical specialty. “Electronics” didn’t mean electronic components but electron theory of matter.

Anyway, at the university I had a chance to do some optional classes where I could create some electronic devices, but those chance was not been realized for variety of reasons.
Also I had only basic knowledge in electronics and there were more clever guys around me.
By the fifth year of study (2003) I finally had got my own PC and started to open for myself the exciting world of programming.
I already wasn’t interested in discrete electronics but I also didn’t know about any kind of programmed electronics at that time.
And it was hard to find microcontrollers in Orenburg in the year of 2004.
(I remember myself buying Microchip PIC16F876 in 2005 and a surprised salesman was asking me what am I intended to do with this 🙂 )

At the last year at the university I was invited to do some quantum chemistry computations, which required some kind of programming and I forget the idea of doing my graduation theses in a field that requires any creation of hardware.

So, in the middle of the 2004, when I finished my education at the university I had the same basic knowledge in electronics as at the beginning. But there was one difference.
In the year of 2004 I had a PC and was able to write a simple software.

After university I had to go to work.
And what kind of job did I get you think?
I had become an engineer at an advertising agency.
My task was to create controllers that could do different flashing lights on the advertising boards.
At that moment I didn’t know about microcontrollers and for half of the year I had been doing controllers using hard logic like counters, decoders, shifters.

But then… Then I had revealed PIC16F84 and PonyProg.
And during the long holidays of New Year 2005 I had made my first, proof-of-concept message board which will be the theme of the next post.