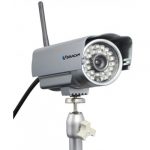 The newest camera works almost well so actually it doesn’t need any outer supervisor, but older camera often changes its date/time and some other settings to default values.
So I have written a watchdog, which is run by the cron on my ubuntu server and checks some camera’s settings. If settings are not correct – they are adjusted.

By the way, I opened both cameras to peek on PCB.
Also I needed to detach IR LEDs from C7815WIP because this camera is looking on the street from within the house and gets its own IR reflections from the window glass.
I have to notice significant difference in quality of the PCBs and soldering of these two cameras. I think that Vstarcam have made large improvements on this field since 2014.
Maybe I’ll post a few pictures of PCB later.

Each camera has a web server and can be configured through GET requests.
The main problem in the setting of some specific value through the GET request was to find a digital key (identifier) for needed parameter because many controls are absent on the GUI web interface, but by googling and doing some tests I could find all the keys that I needed to configure my cameras via “command line”.

For example, you can get all of the camera’s parameters by sending request:

In response your browser will get something like this:

This is a video settings of the camera, which are the most important for me and particularly them I try to check and correct.
Each of these parameters is adjusted the same way:

Where param is a digital key for a needed parameter.
Therefore, somehow you have to build a relation between human readable names of these parameters, which are returned by get_camera_params.cgi, and their identifiers which should be used by camera_control.cgi.

I have found needed digital values by sending commands for sequential IDs and determining what was changed in result. (You can also look on the document at the bottom of this page)

I think that “sub” and “sub_sub” settings are for additional video streams (as I know, C7815WIP has three streams and each of them can be configured independently)
So, to set video framerate to 10fps for smaller video file size you have to perform request:

As I’ve read, new Vstarcam cameras support ONVIF, so maybe there is a more decent way to get and to set parameters now, but I didn’t test it.
Anyway, my C7815WIP does not support ONVIF. It should, but I am unable to update firmware to the latest version. So, to have one watchdog script for all my cameras I have to stick with HTTP GET.

In the request you can change the string “get_camera_params.cgi” to “get_params.cgi” and obtain a large list of administrative parameters:

All these parameters (except the time, of course) remain stable and do not require correction in my case.
Because among these parameters I correct only time I can not tell if there is a common request to change them all. I only can say that the time has it’s own request syntax:

YOUR_NTP_SRV must be the address of some NTP server
TIMEZONE must be the shift in seconds from UTC in your local timezone
UNIX_TIMESTAMP is the Unix Time
Here is the full code of my Vstarcam Watchdog.

Backticks in the line #49 can be replaced by simple print statement if you need only mail to root@localhost, because all output from cron scripts is sent to root@localhost by default if any MTA installed on the system.

My tasks in cron for this watchdog:

That means that all cameras are checked every 15 minutes.
At 12:10 and 00:10 all setting is writing to cameras unconditionally.
At 00:05 each Sunday all cameras are rebooted.

On the PC I use Vstarcam’s “IP Camera super client” version 1.1.4.557 to watch live video and to record stream for the last few days.
I am stick with this specific version because other versions have very buggy ability to change time and bitrate of connected cameras which creates a lot of problems.
They often set wrong time values and default (25 fps) framerate, though I had set 15fps in settings.
Furthermore, earlier versions of “Super Client” sustained those wrong values so I couldn’t change them by other separate software while the Super Client is running.

And one more thing. Both cameras are blackboxes actually. What is in their firmware is unknown.
After power on they are establishing connections not only to NTP servers but also to some unknown, unnamed servers in Amazon cloud.
So I’ve blocked them access to the Internet and until their firmware is unable to change the MAC address – my block will work.

Interestingly enough, my C7815WIP also has opened telnet port where I can login as root with password 123456 (I have found it on the Internet)

UPDATE
After a few months of usage I noticed that weekly reboots and daily unconditional writes do not increase the stability of cameras. Especially C7823WIP.
So I have rescinded them.

Sometimes it is impossible to get a stream out of C7823WIP without reboot. Fortunately, such condition on my firmware can be recognized by values of camera’s parameters. They are all ‘undefined’.
So, I have created a separate reboot procedure and added a checking of camera’s parameters right after they had been read (lines 54,68)

UPDATE
Occasionally I ran across a document on the internet which describes HTTP interface to Vstarcam cameras.
It is written partially in English, partially in Chinese, but it contains some interesting descriptions.
In this document you can find digital keys for camera’s parameters but not all of them. Part of the keys are absent because it is proposed to change these parameters using different interface: set_media.cgi, though actually both methods (camera_control.cgi and set_media.cgi) works.
TIP-Camera-CGI.pdf